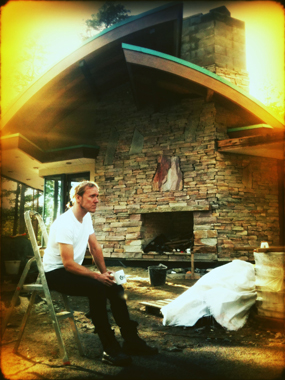 CARO International Art Productions presents “Project Santaranta – Building Dreams,” an exhibition of 36 large-format photographs by an American and Finnish photographers. Project Santaranta showcases the organic architecture of Eric Lloyd Wright and the mystic of nature in Finland on display at the Embassy of Finland in Washington, DC September 20 – 30, 2012 during Architecture Week. The renowned architect Eric Lloyd Wright, recognized for his unique understanding of nature and his work in continuing the family tradition in organic architecture, has designed his only work in Europe for Simo “Sipe” Santapukki – the drummer of a very popular Finnish rock band Apulanta. The site for Mr. Lloyd Wright’s work, called “Santaranta” (“Sandy Beach”), is nestled in the forest overlooking Lake Ruotsalainen in Heinola, Finland. Santaranta is an architectural bridge between the United States and Finland, and an emotional bridge between an old and a young man, two generations seeking to respect nature in all that they do. As the only Lloyd Wright structure built in Europe, the documentation of Santaranta became a project in its self. The Finnish photographic company Eirikuva organized a team of professional photographers to capture the historical structure shown in the light of all four seasons – the only way to understand the true beauty of Finnish nature. The photographers with varying styles include:

The Project Santaranta: Building Dreams exhibit was made possible with a grant from the Finlandia Foundation National and the generous support of Eirikuva, the Embassy of Finland in Washington, D.C., Tuomas Leinonen Video, Peaceable Graphics, Chabela Design House, and CARO International Art Productions.